Embrace Winter On A Pair Of Snowshoes

Linda Radimecky holds the key to another world, one that’s accessible only part of the year. Her key has a history that spans thousands of years and two continents. If you’re interested, she’d be happy to share.

“Snowshoes give us a way to explore a whole different world,” she says. “They allow us to reach places we couldn’t get to in non-winter seasons.”

Take a cattail marsh, for instance. In July, it’s wet and boggy and filled with the hungry hum of mosquitoes. But on a crisp day in January when everything’s buried in snow, you can get out into it and look for tracks to see what’s been stirring. There’s a lot more going on than you might think.

“It’s peaceful and silent,” says Radimecky, who works as a naturalist at Afton State Park near Hastings. “I feel like I’m more in tune with nature and the quiet of winter when I get out on snowshoes.”

Historians believe snowshoes were “invented” somewhere between 4,000 and 6,000 years ago, when prehistoric inhabitants of central Asia strapped pieces of wood and leather to their feet to imitate the way some animals could walk on top of deep snow. It’s a function of what physicists call “flotation.” When the weight of an animal (or person) is spread out over a larger footprint, it floats on top of deep snow, rather than sinking in.

The snowshoe concept spread out from Asia along two different tracks. One track travelled west into Scandinavia, with the pieces of wood strapped to feet growing long and skinny, ultimately turning into skis. The other track took an eastward course, crossing the Bering Strait into North America, where the snowshoe as we know it was created.

Different groups of Native Americans developed different types and styles of snowshoes, depending on their needs. But all the designs relied on a frame made of bent wood (usually from an ash tree), with thin strips of animal hide laced together crosswise and diagonally to hold it together and provide the flotation. The snowshoe played a critical role in the lives of many Native Americans. It was to winter what the canoe was to summer: a mode of transportation and an instrument of necessity for survival.

In 1972, two brothers from Washington state came up with a new approach to snowshoe design, using a lightweight aluminum frame and plastic decking to create the “Western” snowshoe that is most common today. A basic pair can be bought for about $70 and up. Traditional wooden snowshoes are still popular with some, but they tend to be more expensive; some people buy kits from which they build their own. Rentals also are available at many Minnesota state parks.

Learning to use modern snowshoes has less of a learning curve than with the longer wooden ones. Some people say it’s not much different from walking – except that you have big pieces of metal and plastic strapped to your feet. Don’t be surprised if you fall a few times on your first snowshoeing foray. Snowshoeing provides a good winter workout, Radimecky says. The extra weight on your feet and the slightly wider stance required for walking on snowshoes may result in a little stiffness the next day, but getting out into the peace and quiet of a winter day makes it all worthwhile.

A Native American quote from the Canadian First Nations, passed down over the generations, noted that some people try to avoid the snow, whereas “the Indian always looked for the best way to walk on it and live in harmony with nature.” It’s an approach that makes perfect sense to Radimecky.

“If we’re going to be in Minnesota in the winter, let’s embrace it,” she says. “Let’s get out into nature and look for animal tracks and see what’s going on. It’s a lot better than being trapped indoors.”

Go to www.mndnr.gov and type “snowshoeing” into the search bar. You’ll be taken to a page that identifies all of the Minnesota State Parks that rent snowshoes to the public for a mere $6 per day. You’ll also see a list of special state park events focused on helping you learn about this increasingly popular winter activity. A few parks offer special classes where you can build your own snowshoes from a kit. 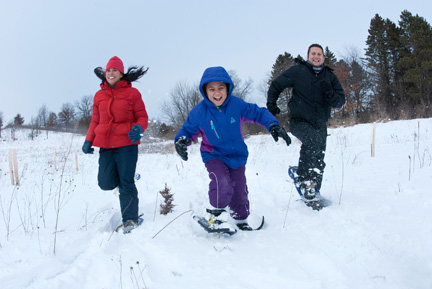 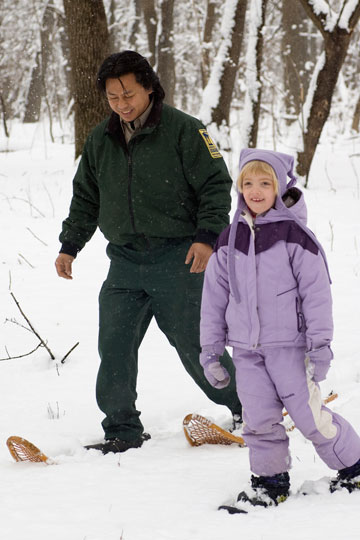