With the Immigrant Microbiome Project, a University of Minnesota study that investigated the gut microbiomes of Hmong and Karen women in Thailand and the Twin Cities, Dr. Pajau Vangay reveals the often unseen intersections of science and social justice.

Anne Fadiman’s 1997 book, The Spirit Catches You And You Fall Down, was arguably the first mainstream introduction to the importance of culturally sensitive biomedicine – as well as the often devastating consequences that patients, families, and caregivers confront when they fail to understand each other.

But unlike the medical practitioners Fadiman’s monograph describes, Dr. Pajau Vangay came to the microbial field well-informed – she was already wizened by her personal history and lived experiences. As a second-generation Hmong immigrant, having moved to the United States from France as a child, Vangay arrived at the Immigrant Microbiome Project at the University of Minnesota (the results found her featured in The New York Times) determined to forge a holistic community-based scientific practice.

But Vangay’s journey to the forefront of compassionate biomedicine was not without its twists and turns. After pursuing undergraduate studies in computer science, she worked as a software engineer in Silicon Valley, formulating what she calls “pretty code”.

But Vangay felt that there was something missing.

“I realized that what I was doing then wasn’t really for me, because I wasn’t making any human impact,” she asserts, “So I did a lot of soul searching and realized that I needed to join an industry that would let me engage with people.”

Once she completed a master’s degree in food microbiology from Cornell University, Vangay decided to come to the Hmong heartland of the United States, Minnesota, where she found that a computational biology program would not only utilize her skill set in computer science, but also allow her to dive deep into communities she holds close.

“Computational biology is the perfect marriage of computer science and biology,” she says, “Moreover, it had been a lifelong goal of mine to be in Minnesota, and have the opportunity to work with the Hmong community.”

Landing a prestigious position with the Dan Knights Lab, Vangay remained unsure about how to best apply her scientific mind to socially grounded work.

That’s when she met Dr. Kathie Culhane-Pera, a family doctor who has worked with the Hmong community extensively (and who appears in Fadiman’s book).

Partnering with Dr. Culhane-Pera, as well as getting Hmong and Karen community researchers on board to develop the study’s design, recruitment methods and strategies for sharing results, Vangay came to spearhead the Immigrant Microbiome Project, which tracked changes in the gut microbiomes of Hmong and Karen women in Thailand and the Twin Cities.

By analyzing the intestinal bacteria of about 500 ethnically Hmong and Karen women living in Thailand and in the U.S., including first- and second-generation immigrants, Knights, Vangay, and the dedicated team of community researchers found that an Americanized diet, defined by lower levels of fiber and more processed sugars, plays a significant role in disrupting immigrants’ microbiomes – and is associated with more obesity.

Published in the journal Cell, the research findings are “the first evidence that moving to another country – especially to the States from a developing nation – does cause you to acquire more of an American microbiome,” Dr. Knights told NPR.

To disseminate the results amongst members of the community, Vangay joined forces with the Hmong American Farmers’ Association and local Hmong chef Yia Vang of Union Kitchen. She conducted a series of classes and events aimed at encouraging people to think about what they eat.

“One of our most successful events had a big mix of young and old people. We went around the room and all the elders introduced themselves, and they instantly started talking about how they had struggled to make do with the sometimes unfamiliar produce that had been available to them. They were very willing to talk,” she says.

“Working with Yia made me think a lot. There are so many dishes we eat without pondering their significance. Our people moved all over the world, and our food changed along the way – we adapted, and made dishes – like pho and more – our own.”

Without the community advisory board, Vangay stresses, the study – from start to finish – would not have been possible. In addition, her vested interest in the Hmong community breathed life into the thoughtful venture – and continues to spur her on as she works with California Council on Science and Technology as a Science Policy Fellow. She is, in her own words, continuing on her quest for impact via science and policy.

“Being Hmong, I have a unique perspective, and I want to find a way to make it relevant to science. I didn’t have a lot of mentors growing up, and it wasn’t till I got to Minnesota that I felt I could really own my Hmong identity. Now, I hope that I can be a resource to Hmong women,” she says.

“Hmong women, in particular, are doing so well and really participating in higher education. I feel strongly about having more of us in STEM. We are so flexible and always able to adapt. Despite all the hardships, we stay resilient.” 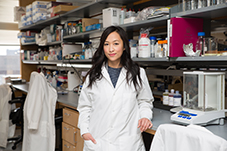 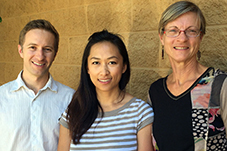