DNR EagleCam Features One Of The Best “Nature Shows” Around

It’s a cross between reality TV and something you might see on Animal Planet, a live, as-it-happens close-up on one of America’s most beloved species. And you don’t even have to pay for cable to watch it. Just direct your computer or smartphone to www.mndnr.gov/eaglecam to tune in to what’s become one of Minnesota’s favorite shows.

Since its launch in January 2013, the Minnesota Department of Natural Resources’ EagleCam has provided a live video stream from an active bald eagle nest in St. Paul. Over the past five years, close to a million people from all 50 states and more than 150 countries around the world have watched spellbound as a pair of adult eagles annually nest, lay eggs, hatch them and raise the chicks. In all, 10 young eagles have fledged and flown the nest, all caught on camera.

Once pushed to the brink of extinction, bald eagles have made a remarkable comeback, with more than 10,000 breeding pairs in the lower 48 states now. That’s largely the result of a ban on the pesticide DDT and special protections given eagles by laws such as the Endangered Species Act. Programs like the DNR’s Nongame Wildlife Program, which provides the EagleCam, also have helped the bird’s recovery.

One legend has it that the bald eagle became America’s national symbol because, at an early battle in the Revolutionary War, the noise of the struggle drove the big birds from their nests to circle over the fight, screeching all the while – leading one patriot to claim they were “shrieking for freedom.” What’s known for sure is that the bald eagle made its first official appearance on the seal of the United States in 1782, and it has continued to serve as a national emblem ever since.

Part of the bald eagle’s majestic appeal stems from its size and flying talents. An adult female bald eagle can weigh 10 to 15 pounds, with a head-to-tail length of about three feet, and a wingspan stretching six to seven feet or more. Males are about ¾ the size of a female. The birds are powerful flyers, riding thermal updrafts to heights of 10,000 feet and soaring for hours. They can fly at 30 to 40 miles per hour, reaching speeds up to 100 when diving, and sometimes engage in aerobatic stunts, tumbling and twirling through the air as part of courtship rituals.

Bald eagles usually mate for life, using the same nest for many years. Watchers know for sure that the female appearing on the DNR EagleCam has starred in her leading role for the past six seasons, because she has a leg band that identifies her. But this year there’s a new male, leading many watchers to wonder what happened to her partner of years past. Eagles can live 20-25 years in the wild, although 70-80 percent of them don’t make it to the age of five, when they are considered adults and are able to reproduce. Common causes of death include being struck by vehicles, disease, electrocution and lead poisoning.

Bald eagles build bigger nests than any other birds, averaging about four or five feet in diameter. One bald eagle nest in Florida was measured at nearly 10 feet across, with an estimated weight of more than two tons. The female eagle lays two or three eggs and both parents share incubation duties. The eggs hatch after about 35 days. This year, the first egg in the EagleCam nest was laid on February 19, Presidents’ Day – a fitting birthday for America’s national bird.

Both parents take turns bringing food into the nest, tearing pieces off and feeding them to the hungry eaglets. Common food items seen on the EagleCam include fish from a nearby spring-fed pond and small rodents, such as squirrels and rabbits. An eagle can carry prey weighing up to about one-third of its own body weight, meaning stories about them soaring off with cats and dogs in their talons are unlikely (unless it’s a very small dog or cat). After about 10 to 14 weeks in the nest, the young eagles “fledge,” meaning they’ve grown the feathers they need to fly.

You can watch the egg-laying, the incubation, the hatching and feeding and fledging all for yourself at www.mndnr.gov/eaglecam. The EagleCam and associated technology are paid for and maintained by the DNR’s Nongame Wildlife Program, which is largely supported by voluntary contributions people make at tax time. Line 21 of Minnesota’s income tax form gives people an opportunity to donate to the program, which works to help thousands of species of Minnesota wildlife thrive through habitat restorations, surveys and monitoring, technical guidance, and outreach and education – critters such as bees, butterflies, songbirds, loons, frogs, turtles and bats, as well as eagles. Donations to the Nongame Wildlife program are tax-deductible.

With more bald eagles than any state except Alaska, Minnesota is also a great place to get outdoors and see the magnificent raptors in the wild. Minnesota state parks along major rivers are a great place to look for them. State parks in the Twin Cities area where you have a good chance of seeing eagles include Afton and Fort Snelling. South of St. Paul about an hour, Frontenac State Park near Red Wing offers excellent eagle watching opportunities from bluffs overlooking the Mississippi River. And north of the Cities, Wild River State Park includes an active eagles’ nest near a trail, with likely sightings along the St. Croix River as well. 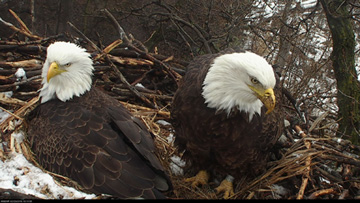 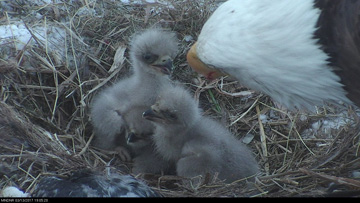