One stormy night, a lonely housewife took a walk out in the fields that encircled their remote home. She was headed to their barnyard shed to obtain a few nails. Heavy winds had knocked down the piece of wood that was previously nailed over the hole in their kitchen wall where the window used to be. If she didn’t nail the piece of wood back before her husband returned home from the farm, boy would he have words for her. He was a man of many words when he was angry; he was only mute when consuming roast pork and fine field rice. Their whole house had been falling apart ever since the day she’d married him. She’d even asked him to put down some money to have it fixed, but his answer was always the same. “We still have the upkeep of the pigs and the farm!” he’d grunt. “We are not made of money! Useless woman, what would you know about fixing anything!”

Mud got into her night slippers and she cursed aloud. The air was starting to smell more and more like pig manure so she knew she was getting closer to the barnyard shed. She needed to retrieve the old rusty nails that her husband kept there in his old toolbox so she could nail wood back in.

“God darn window!” she cursed. The darn thing was the cause of her present life misery. “And darn husband!” she cursed again. That fool was the real reason why that window needed replacement in the first place. She was always trying to please him and make things right. For during the day when she’d prepare his evening supper, the fumes from her simmering broths and grilled meats would tour all throughout their home and soak themselves into the sofas, lamp shades, and wallpaper. When her tired husband took rest on the couch after supper, he’d chide, “Wife, your cooking is already bad enough, why do you get it all over the house too?”

She was so tired of hearing that tone of his. She was tired of his complaints. So one evening as she cooked, she’d thought it a bright idea to pry the window open just a smidge. It would let out the cooking exhaust and make the house less odorous. Of course, the only problem was, the darn thing was nailed shut. She’d decided then to take her husband’s old ax and to the center of the double enclosure, slam that old thing wide open. Immediately, she’d felt a breeze of fresh air sweep into her kitchen, wicking away the building moisture at her temples. She’d never breathe so well during all her years of cooking for her husband, the food fumes rushed out like evil spirits from a church. It was magnificent the change of scent in the house.

Her husband had come home that night and as she’d expected, did not complain about the aroma one bit. However, upon discovering the broken window, he became livid. “You turd!” he’d exclaimed. “Look what you’ve done, you useless wife! How can we afford to fix the window when we’ve the upkeep of our farm? You wasteful woman!” Her heart had clenched tight at his words, as it was doing now as she thought about his unkind words. She even teared up a little now as she wondered what he’d say to her when he came home tonight and realized that the storm had knocked down the window again. Why was she always doing everything wrong? Could she never do anything right in her life?

The shed door creaked open as she approached. She bit her lip and rubbed her eyes with her fists. Inside was quiet as a mouse and darker than night. A pulse throbbed at her throat, but she entered anyway. She could hardly see her own two hands reaching before her to feel for the light switch. Then suddenly, her fingers landed on something tough, like the back her husband’s leather coat. She ran her hands up and down the thing, she suspected to be a decorative wall of some sort. What in the world could this be, she wondered to herself as her fingers trailed along its side. This texture of the intricate pattern indeed resembled that of her husband’s leather coat, from the sleeves to the neck collar. She wasn’t sure what to make of this. If only she could find the light switch, she would end this unnerving suspense at once.

Like someone had read her mind, a dull candlelight was lit and flickered dimly before her. It provided a faint light for her to see just what was before her. She bit her tongue at the surprise. Hanging upside down from the roof of the shed was her naked and blood-drained, pale husband strapped at the ankles swinging slowly in midair. And where the candlelight stayed afloat, two rows of porky nipples illuminated in flame. Her breathing hastened, but she calmed herself. She squinted her eyes before noticing that she wasn’t the only one short of breath in the shed. It wasn’t long before she’d realized how the candle was able to stay afloat. Where the candlelight flickered, a pair of upright pig hooves clasped around the rod of melting wax. 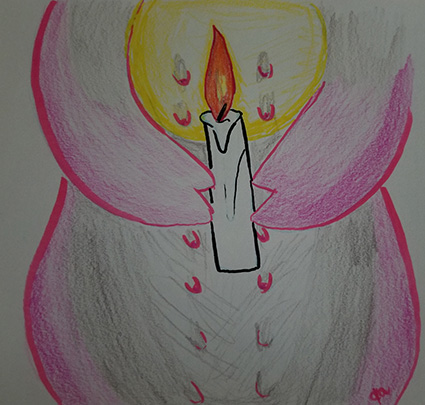