Last fall at Afton State Park near Hastings, 60 fenced-in goats ate about three acres of buckthorn leaves and bark per week, which ultimately stresses and kills the buckthorn. It took four weeks to clear the area. On a recent chilly afternoon at the park, workers moved branches of the invasive species to a massive pile for later burning.

No matter what the season, staff with the Department of Natural Resources Parks and Trails Division removes invasive species like the pervasive buckthorn or bush honey suckle. What if they didn’t?

“Park visitors would notice,” said Anton Benson, a DNR regional resource specialist. “If buckthorn invaded a savannah or grassland, it would transition in a few years and visitors couldn’t walk through the thorny brush.” Nearby vegetation feels the effect of the pesky species, as well, as it hogs all the sunlight trying to reach the forest floor.

Nate Renk, area resource specialist out of Forest Lake, said that open prairies are vulnerable to buckthorn, which covets an open space to expand into and dominate. Over time, remnant prairie pockets like those at Afton State Park would disappear.

Park staff have a bevy of tools for invasive species removal, like hungry goats, heavy equipment including brush mowers, chippers and power saws, and prescribed burns. Winter provides a good environment for burning piles of brush since the ground is frozen and snow covers nearby flammable grasses and undergrowth. Sensitive areas such as wetlands freeze and are better protected from the use of heavy equipment.

Also, some rare species like bats hibernate during the winter so they sleep through the disruption of invasive species removal. Finally, brush is better if it’s burned in large piles, so when there is at least three inches of snow on the ground, the wildfire risk is removed. Other benefits to staff include the fact that a minimal number of wood ticks are active, and park visitors aren’t inconvenienced by the activity. Volunteers, private crews, and Conservation Corps employees assist park staff in invasive species removal.

From the above, perhaps the goat contribution affords the greatest curiosity. Goats? Yup. The animals naturally browse on vegetation and prefer the new growth at the top of the plants. Sometimes the buckthorn is too tall for goats to reach the tasty top leaves, so a larger, older goat will knock it over. Nate Renk heard about this phenomenon but didn’t believe it until he saw it. After an older female goat brought down the buckthorn, five or six younger goats rushed over to chow down.

Benson said that the goat owners raise the animals as professional consumers that are moved in trailers from location to location. Portable electric fences assure that the animals stay in place.

“We pay them (the goat owners) to feed their goats,” Benson said. “They have a financial incentive to haul the goat herd in. The goats are accustomed to being moved around from site to site.” Park and Trails staff and the herd owners check on the animals throughout their stay. Sometimes after the goats have been in a place long enough to learn the lay of the land, they notice tempting plant life beyond the fence and try to make a run for it. Or a deer will damage the fence at night. Vigilance is required.

The results from the fall buckthorn consumption were good, and the goats will be on grazing duty in the spring. After the grazing season, prescribed burns will remove the remainder of the buckthorn. Prescribed burns don’t work on areas heavily infested with buckthorn due to the density of the growth which prevents the ground from drying in the sun.

Challenges to invasive species removal include a need to access a site without impacting groomed trails. To that end, sometimes equipment is dragged to a site on utility sleds. Also, park visitors need to be steered away from heavy equipment as a safety measure. Finally, staff need to stay warm when operating the saws in winter, and they need to stay cool while burning the massive piles.

All of that is left to the humans to figure out. To the goats, Afton State Park offers a grazing wonderland where the only obligation is to show up with an appetite. 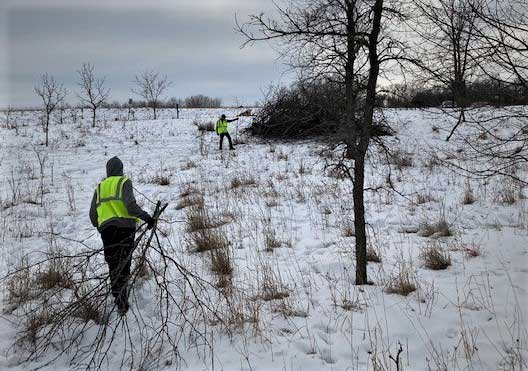 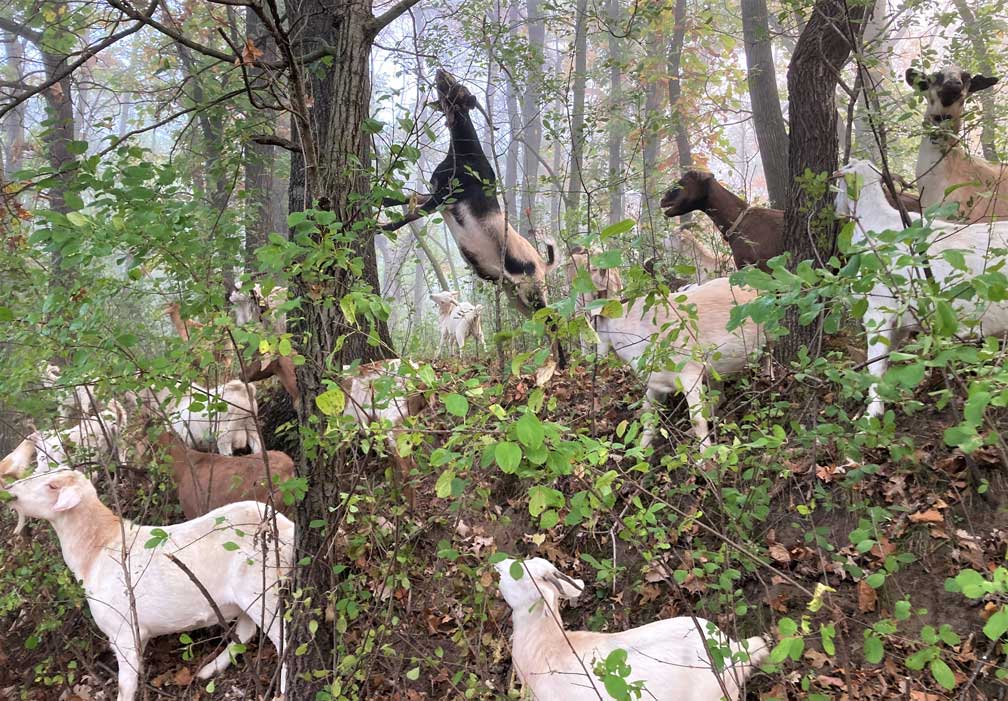