Bo Thao-Urabe, CAAL’s executive and network director, for years has been a thought leader in the Hmong and Asian Pacific American community. She co-founded CAAL in 2013 after a series of conversations that assessed that there was not another effort that brought emerging and experienced Asian Pacific American (APA) leaders from different sectors, age groups and various ethnic communities together. CAAL was created as a vehicle to organize, create shared agendas and to become a network of support for APA leaders who wanted to use their experience, assets and skills to ensure equity for all.

To help realize CAAL’s vision of embracing the diversity and complexity of Minnesotan communities, Hello Neighbor MinneAsianStories was launched in 2018. CAAL invited members of the APA community to write their stories, which portray the rich diversity and multiculturalism of people of Asian Pacific descent living in Minnesota by illustrating in words what data charts cannot truly convey. As a result, MinneAsianStories created opportunities within the APA community and the larger Minnesota community to deepen collective understanding and to engage with one another.

By addressing the dearth of images of APA individuals in mainstream media, books and publications, MinneAsianStories has succeeded in illuminating the multifaceted diversity of culture, traditions, adversity and resilience that are the bedrock of APA communities. Through the telling of individual stories by Asian Americans who have been here for generations, those who arrived as refugees and others who are newcomers, MinneAsianStories has advanced Minnesota’s understanding of the ethnic and diverse cultures that make up Minnesota’s APA community.

The APA population of over 256,000 in Minnesota is diverse ethnically and culturally. In fact, Asian Americans are Minnesota’s most diverse population, comprised of more than 40 ethnic groups, including Chinese, Japanese, Vietnamese, Laotian, Hmong, Karen, Burmese, Cambodian, Thai, Filipino, Pacific Islanders, and South Asians, including Pakistani, Bangladeshi, Sri Lankan, Nepalese and Afghans, to name some. Yet, here in Minnesota, it was abundantly clear that non-Asian neighbors know little about Asian Pacific Minnesotans. CAAL wanted non-Asian neighbors as well as ethnic Asian communities to learn and move beyond the stereotypes to see how vibrant and complex APA communities are. MinneAsianStories creates an inclusive space so that APA individuals can share their stories with intention, with each other, and with non-Asian Minnesotans.

The impact of MinneAsianStories is long lasting. The stories with photos were turned into an exhibit, which make them available as an inviting traveling display for students, teachers and community. Last year, the display was exhibited at the State Capitol for Asian Pacific American Heritage Month, then traveled to the Lyon County Historical Society in Marshall, MN, and was also featured at the YMCA in downtown Minneapolis and the Best Buy headquarters in Richfield. The display generated excitement and invited discussion with some of the authors of the stories, which provided ongoing opportunities for conversation among APA and the majority Minnesota community.

Instead of merely presenting data and projecting charts, MinneAsianStories successfully illustrated how complex and nuanced APA Minnesotans are. The exhibition forces the observer to see beyond the stereotype. Overwhelmingly, the audiences shared that they learned more about the diversity of the community in ways they had not understood before and they appreciated learning through the stories rather than just looking at data. Indeed, the visual impact of reading the stories displayed have had a lasting effect.

Within the APA community, it has also prompted new conversations. Ethnic groups within the Asian population are not immune to stereotyping other ethnicities. MinneAsianStories interrupt that process and invite observations and conversations that probe beyond superficial exchanges. In addition to validating the lived experiences, one writer shared, “Moving to Minnesota, learning and growing, I started to love myself and my Asianness more fully.” For some storytellers, they learned that their stories were worthy. Many shared parts of their lives they had never thought to share before – about love, family, work, struggles, food and music. Writing their stories helped them be their whole selves.

Today, CAAL has built a network of more than 2,000 multi-generation, multi-sector and multi-ethnic leaders who harness their collective power to improve the lives of community by connecting, learning and acting together. 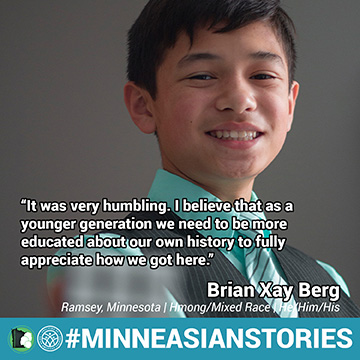 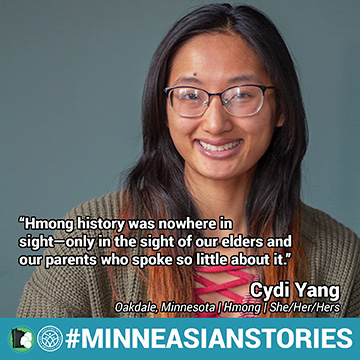