Funeral drums rumbled at the front of the crowd. Children and adults sat cross-legged on the ground, each holding an unlit incense stick, all bowing their heads as the Txiv Qeej bowed his qeej and raised a leg in fine performance. Cuaj Leeg could tell that this crowd had been here for a few days now, because each of them were droopy-eyed, had untidy hair and were scrubbily dressed. This was how things had to be for the family of the dead, for each day of the funeral, they needed to be there to guard the body. Each of their incense, once the Qeej performance was over, would be planted in the bowl of rice before the dead, and lit for blessings. The Txiv Xaiv, chanting his chant, would sing without end, taking an hour, sometimes even two or three. He neither took a break to sip water nor sit down. Cuaj Leeg once heard that the Txiv Xaiv was in a trance when chanting. The spirits were aiding them to finish their words of guidance for the dead, leading the dead to the place where she needs to be in order to cross over. This procession got old quickly especially since Cuaj Leeg was here every weekend. It was the same thing over, but for a different dead person. Cuaj Leeg didn’t study the arts of Txiv Xaiv, but he was sure he could recite at least two of the pieces by now.

Cuaj Leeg wasn’t related to this dead lady. She was a Thao. He didn’t know of any Thaos that his family was related to. But he was there anyway, to receive the dead’s blessing. To help the Thao family, also strangers to him, pass on their deceased. It was the Hmong thing to do. The more, the merrier. Of course, there were other reasons why Cuaj Leeg came so often. It was his way of killing time. Ironically, visiting the dead was his way of staying alive. It helped ground him to reality; it helped him forget that he was alone. It helped him forget about her, his late wife.

Cross-legged, spine straight. Cuaj Leeg shifted in his creaky metal-folding chair. He gathered his short arms before him and folded his hands on his lap… breathing was harder when he tried to remain composed. He exhaled. Okay, hands to the side. But then he probably looks like a child without manners. Cuaj Leeg rubbed his eyes. It didn’t quite matter which position he sat, Cuaj Leeg would be out of breath anyway. He wasn’t very young anymore. Not like he used to be. He never imagined that aging would come with extra weight, extra grief, and extra loss. Cuaj Leeg hadn’t figured that about the future. One thing he prided himself with was the fact that he was always so good at living in the present. He never quite looked into the future, neither did he look to the past. Cuaj Leeg was good at embracing the present, the presence of his late wife, there he had good days.

His wife had passed some years ago, and even so, the thought of her always left Cuaj Leeg staring blindly at green meadows, wondering when they’d meet again. At the gate of heaven when they will be together again at last.

Cuaj Leeg felt a tingling at the crease of his eyes. He swallowed silently. Shut his eyes tight to force the forming tears out from their hiding. He didn’t want other Hmong men to think he was crying over the dead. He didn’t know her after all. It wouldn’t make much sense. As a matter of fact, Cuaj Leeg didn’t know most people here. His friends that usually came to court divorcees at the funeral home weren’t there that weekend. Odd.

Funeral drums reverberated. The walls also seemed to rumble. Cuaj Leeg felt like he was going deaf. Beside the loud pounding, the Txiv Xaiv’z voice, the Txiv Qeej’s playing, and an indistinct white noise chatter, there was a constant ringing in his ears. Cuaj Leeg often became this way when deep in reflection. Thoughts of his late wife allowed him this escape. He remembered the day that he met her. His ex-girlfriend, Maiv, had married his younger brother already. Cuaj Leeg, at the time, didn’t think he’d love again. But when he saw her, everything changed. Theirs was an arranged marriage, but a good one. He’d seen an angel. Then and now, there was no one as gorgeous as his late wife. She had the beauty of a heavenly daughter, one that descended onto earth and fell into his arms. At that moment nothing else mattered to him. He knew then that once he had her in his life, he could do anything, anywhere.

It was starting to get colder as more people arrived at the funeral home, as the hour aged. Every open of the front double doors brought a blast of that frozen Minnesota breeze into the room, a chill that Cuaj Leeg could feel down to his bones. Cuag Leeg clutched onto his arms tight as he watched the wave of people enter in, each of them dressed in their finest, elderly women with pearls and in finely altered Laotian dress. One man wore a suit with no tie. Cuaj Leeg chuckled on the inside. How tacky. One lady wore a thick fur coat and boots, noticeable among the crowd because of her bright dark lipstick. A beauty to be certain, but she came in with a man. Probably her husband. Behind her, two girls – probably her daughters.

And then Cuaj Leeg’s heart fell from his chest to his toes. Behind the girls was an ornamented woman, dressed in traditional Hmong attire, coin purses, red and green sashes and all. Her cheeks were rosy; she wore a big smile. Elders warned about traditional Hmong-wearing persons at the funeral home. These weren’t human.

Cuaj Leeg swallowed. Could it just be in his head? He rubbed his eyes. There she remained, walking in. She met his eyes and grinned. The hairs at the back of his neck jolted up. Last he heard she was still alive. So, was this really her? Maiv.

Stay tuned for Chapter 6 in the next issue of the Hmong Times. 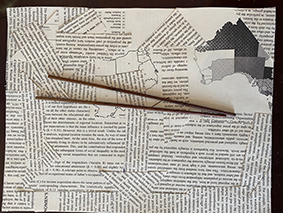 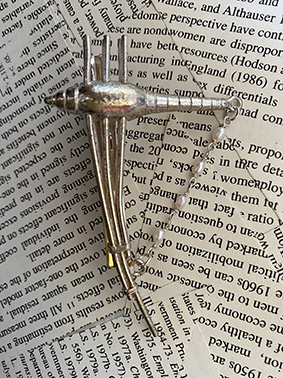