Hmong Village, is it a village? Or a ghost town? Ntsuab has always seen it as the latter. Everywhere she looked, there was loss.

Such a loss it was – the sweaty boiled chicken and the now-slimy pork ear laab sitting alone there on the vendor counter. A terrible loss – the links and links of dried Hmong sausage scorching in the glass roaster, and the silver pails of hardened purple glutinous rice that crunches now, grains stuck in ones teeth upon chewing. A tragic loss – the stretched and boiled and julienned pork uterine sack that once nestled the victim’s baby pig nice and warm, now but a slimy snack for the teeth of its consumers, left sizzling in the vendor counter, now appearing rough at the edges where the knife did cut it and toss it into a salad sticky with lemon juice, Thai chilis, cilantro and green onion. A loss – not to mention the bowls and bowls of almost-all-eaten pho abandoned at the dining tables, all but strands of white hair and the occasional basil leaf and bean sprout pod left floating in the diluted beef broth, wet chopsticks balanced across the bowl like seen in the Chinese movies.

The sad house fly, now a Hmong Village fly, buzzed from table to table in seek of scrap droppings from previous food-consuming customers. Sometimes, bratty Hmong kids would leave their empty Boba tea plastic containers and straw at the tables after they were done eating, and the little old Hmong woman who wiped the tables would have to pick up after them; those sad flies would scurry toward that sweet smell, trudging on the edge of the cup and inside the cup, licking and breathing and licking. Ntsuab recognized this scene, this feeling. She was the fly. Buzzing. Scurrying. Ntsuab was one of those flies, eating and licking leftovers of her predecessor, Niam Loj (First wife).

But what a prison she has entered. The moment she left her home of Laos, in the foggy mountains where her parents’ thatched hut had brought her up remained, she died that day. The spirit in her was no more. When she married Yim Leej, her 55-year old husband, her inner self shut down and she surrendered to a life of “second-wife-hood” where she would bear children and be a good Hmong housewife, so the community wouldn’t speak ill of her and her husband’s name. But it seems like no matter what she did, be it right or wrong, people spoke. Word got out. People spoke. This tore her up inside.

Ntsuab rubbed her fingers together, trying to rid of the steam roll grease that was making her fingers slippery. She usually only ate pork steam rolls when she came here. It was only four dollars. It used to be three dollars long ago, but that was when Hmong Village just opened. She only ever carried twenty dollars with her at a time, so four dollar steam rolls were the tastiest and most filling meal she could afford. If she’d gotten rice and meat, it’d run her anywhere from nine to twelve dollars. She couldn’t afford that, especially not when her daughter and Meng still needed money for school at random times. Nstuab never quite understood it, but school here in America cost a lot of money. Sometimes teachers would want kids to have certain random things that cost money. Snacks. Cold lunch. Snow pants. Tissue boxes. Honestly, Ntsuab never knew why any of those things helped kids with their education. It made Ntsuab annoyed most times. Those darn teachers just wanted to milk her wallet.

Sitting here, eating the last of her steam rolls, it melted in her mouth, on her tongue. She couldn’t ask for a more delectable experience. This was one of the few things that Ntsuab looked forward to throughout her week. Even if her husband and kids judged her for coming here so often. That was one thing she’d convinced herself not to care about – a difficult task because Nstuab tended to care about everything. Most tasks, to be frank. Tasks like taking care of her handicapped, gout-ridden, dialysis-bound husband, Yim Leej. Taking care of her stepson Meng. Taking care of her own daughter who was still just a baby to her. And of course, there was the family, her parents, that she’d left behind in Laos. It was her job to care for them now that she was “free.” Every month, there was an expense at the farm that she needed to tend to. Ntsuab would send 100 dollars, 200 dollars, or 300, at a time, monthly, to tend to their needs. In truth, she knew these weren’t “needs” as much as they were, lavished indulgences. She knew the Laos life; it was a poor one. No sweets. No pop. Sometimes even no salt to go with rice. Perhaps this was her fate. Perhaps her life was written this way, as the caretaker to many. Many but herself.

Nstuab’s phone dinged. A text. She picked it up.

Nstuab wiped her lips free of grease, packed that napkin and her empty steam roll tray into the plastic white grocery sleeve and headed for the trash bin. What now?

Stay tuned for Chapter 5 in the next issue of the Hmong Times. 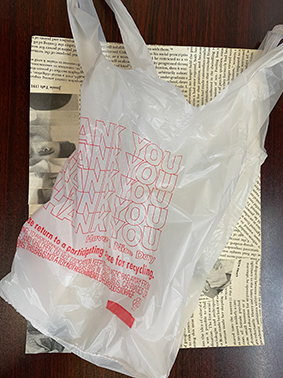 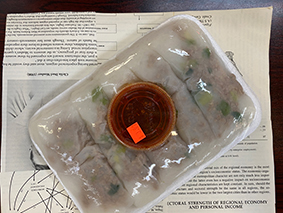