Your Guide To Reducing The Prom Price Tag

(StatePoint) Prom is a time-honored tradition and a rite of passage for teens. Originally inspired by graduation celebrations and debutante balls, prom today is now an extravagant, defining moment in a teen’s life, bearing little resemblance to promenades of the past – especially when it comes to cost.

All of this indulgence unfortunately comes with a price tag, and prom expenses can put a large dent in your wallet. Teens are spending nearly $640 on prom hair and makeup, outfits, tickets and rides, according to Yahoo Style’s “2017 Prom Across America” survey – and that doesn’t take into consideration any pre-prom expenses, such as the promposal, which, according to Visa’s annual prom spending survey, adds another $324!

In recent years, teens have upped the ante, finding elaborate – and often public – ways to ask someone to prom.

What are some popular promposal tactics? Spelling “prom” with pastries, creating giant duct tape posters, decorating lockers and bedrooms, and popping the question on the jumbotron at a sporting event.

When proms first became common, teens were encouraged to wear their “Sunday best” – implying a nice dress or suit they already owned. Not so anymore. For girls, prom is all about the dress, and finding the perfect one at the right price is no easy task. “Seventeen Magazine” reported that girls spend $231 on average for a dress, $45 on shoes, $23 on a handbag, $32 on jewelry and $118 on hair, nails and makeup.

While guys typically spend less on prom clothing and accessories, they’re still shelling out for a tuxedo, corsage and other accessories.

Cut Costs, Save For College

The steep prom price tag is leading teens to look at alternatives, such as ditching typical outfits and making their own. One example is Duck Tape formal wear. Over the last 17 years, the Duck brand Stuck at Prom Scholarship Contest has attracted more than 7,000 entrants and awarded more than half a million dollars in scholarships to teens who crafted their Duck Tape prom attire.

Now in its 18th year, the contest will once again help offset the skyrocketing costs of college by helping teens save on prom and by awarding creative makers for their unique promwear designs, offering two individual $10,000 Grand Prizes: one in the Dress Category and one in the Tux Category, totaling $20,000. For more information, visit stuckatprom.com.

Other ways to cut the prom price tag? Hair, makeup and other accessories can cost more than $200, so skip the salon and opt for online tutorials for hair and makeup inspiration. Also, DIYing accessories, such as jewelry, a clutch or flowers (i.e. Duck Tape roses), can add a personal touch, and keep money in your wallet.

Setting a budget and looking for opportunities to save money can help ensure prom is an amazing night that doesn’t break the bank. 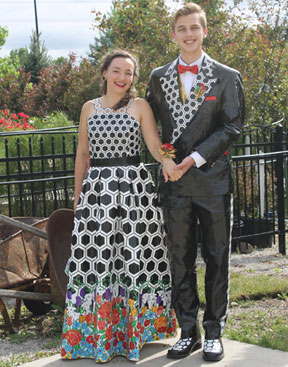