The Twin Cities Has It All – Including Lots Of Places To Fish!

If you love angling and want to live in a big city, you couldn’t do any better than the Twin Cities metro region. Bright lights, big fish – we’ve got it all.

That status is largely the result of the region’s quantity and quality of water, which provides a wide variety of angling opportunities. For starters, three of the state’s major rivers converge in the metro region: the Minnesota, Mississippi and the St. Croix. Flowing through the heart of the region, the Mississippi’s northern reaches are well-known as a top-notch bass fishery. Then there’s Pool 2, the area between the dams at St. Paul and Hastings. A few decades ago, it was so polluted that bullheads could barely survive. Now it’s recognized as a world-class year-round catch-and-release fishery for walleye and sauger – thanks largely to state and local efforts to clean up the river. The St. Croix offers anglers the chance to hook Minnesota’s largest and longest lived fish, the lake sturgeon (both catch-and-release and harvest seasons), along with plenty of smaller fish. All three rivers provide excellent opportunities for catfish, with state records having been pulled from the metro Mississippi and St. Croix.

Numerous smaller rivers and streams flow through the region as well, including the Rum, the Crow and the Vermillion, a designated trout stream with a reputation for harboring lunker brown trout. Check out Rambling River Park in Farmington, where the Vermillion gets stocked with rainbow trout.

The Twin Cities region also features a number of consistently productive large lakes. Waconia, Minnetonka, Prior, Independence and Medicine in the west metro area, along with White Bear, Bald Eagle, Forest, Marine and Coon Lakes in the east metro area all are reliable for yielding up bass, panfish, pike and walleye.

Smaller lakes also abound. Clear Lake in Washington County, for instance, holds good populations of walleye northern pike and hybrid muskies. West of the Mississippi, the Minneapolis Chain of Lakes provides good walleye fishing, especially on Cedar and Harriet, which are regularly stocked. Both lakes are good for shorefishing.

While catching fish oneself is pleasing, watching kids do it can be even more rewarding. The DNR’s FiN program (Fishing in the Neighborhood) stocks catchable size fish in more than 60 smaller bodies of water around the region – an excellent choice for getting some big grins and squeals of excitement from young anglers (www.MNDNR.gov/FiN). Consistent producers for shorefishing include Wolfe Lake in St. Louis Park, Centennial Lake in Edina, Smith Lake in Bloomington, Powderhorn in south Minneapolis. Nearly any lake with a fishing pier is likely to be filled with hungry little bluegills.

The metro region just offers an abundance of angling potential like no other urban area. No matter where you live in the Twin Cities, there’s good fishing nearby. All you need is a license and some tackle.

If you’re under 16 (or fishing in a state park), you don’t even need a license. And if you go to one of the growing number of state and regional parks that offer free loaner tackle, all you need is some bait – and a desire to enjoy some of the best fun in town.

For more information on where to fish in the metro region, visit www.mndnr.gov. 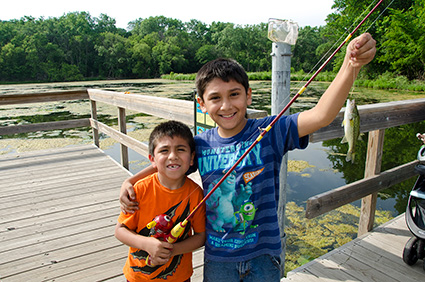