Nkauj Yiv returned home that afternoon and immediately slipped out of her gown and got dressed before starting on dinner. Her father, stepmother, and stepsisters would be home any hour and she wouldn’t disappoint them without a cooked meal. That was always how it’d been and it’d be, she imagined, for some time.

She was not going to college this fall and probably wouldn’t in the spring either. Though she had applied for one college under the instruction of her former high school physics teacher, she hadn’t heard anything back from said school. Though a little disappointing, she figured that school will come when the time was right. Perhaps if she found a job and saved up, she can afford community college and maybe even a small apartment somewhere for herself.

That idea always tore her inside a little. The thought of leaving her father alone with her stepmother and stepsisters scared her. Despite the feeling, she realized that that day may come whether she welcomed it or not. She was finally going out into the world in search of a potential partner, one she hoped would be kind, humble, and understanding. That would definitely change the dynamic of her life, she thought, for the better. Her stepmother and stepsisters wouldn’t have great things to say about that had they known. And if she was honest, she was not too sure how her father would feel about the prospect of marrying her off either. Would he be happy for her? Or burdened with the thought of her departure? Though stepmother did much to please her father as a wife, neither she, nor her stepsisters held much interest in caring for him, which is especially crucial since he was not at his healthiest. Struck with diabetes and gout, he often suffered from low blood glucose and bouts of pain to his lower extremities. Since the passing of her mother and then grandmother, Nkauj Yiv has been the only figure still caring for him.

Nkauj Yiv soaked two bowls of fragrant brown rice into lukewarm water and set it on the counter. Since she hadn’t soaked it overnight, as she should have, she acquired a medium-sized silver pot and heated up some water to soak the rice after the first round of steaming. Her father only tolerated rice made the traditional way, and so this was and has been Nkauj Yiv’s routine. After taking a sidelong glance at the disheveled food remnants in the refrigerator, Nkauj Yiv settled on collard greens and Chinese Gailan. She’d boil the collard with a few pork ribs and stir fry the Gailan in olive oil. Then she’d pry open a butternut squash, cut it into cubes, and boil it down for a plain broth. Every meal had to have something brothy, something dry, and something plain. That was how her mother had always cooked for her father and that was how she’d continue to cook for the family.

As Nkauj Yiv rinsed the Chinese Gailan under warm running water, her thoughts drifted back to the gentle touch of Nraug Txuj just but an hour ago. It was like a movie that played over and over in her head. She massaged the pad of her thumb over her other hand at the spot that Nraug Txuj had held. His contact seemed to imprint on her skin the memory of his touch. Her gaze focused on a white lime spot on the wall of the sink as her auditory sense became lost in the humming of the running water. Though time with Nraug Txuj had been brief, it meant more to her than any encounter she’s ever had. She realized then that it’d be difficult to wipe Nraug Txuj from her memory. She didn’t know anything about him other than his name and age.

Setting the rinsed Gailan in a bowl on the counter, Nkauj Yiv started on the collared greens under running water, peeling each leaf gently and rubbing away the dust of soil at the crevices of the bud. Had she just had a few more minutes with Nraug Txuj, what more would she have said to him? What more would he have said to her? Could they exchange numbers and agree to meet beyond the New Year. Though Nkauj Yiv didn’t have a cell phone, she would have felt open, perhaps, giving out her email address or maybe even her home phone. But that would have been tricky keeping their conversations away from other house occupants. Boy, she couldn’t take her mind off of today. And indeed this would be a memory that she held for a very long time. What was love if not this? She felt her lips turning into a girlish grin and shook her head dismissively at the naïve nature of her thought. Was it possible that a person can fall in love so quickly? She wasn’t sure.

Following dinner and dishes that night, Nkauj Yiv returned to her room and surveyed her soiled satin gown. There was a rip at the lower left side, probably torn from when she’d slipped and fell during her escape. She felt a little regretful at the blemish that she’d caused on the beautiful gown, the only thing besides her smile that she’d have of her mother’s. She’d mend it with a needle and matching thread when she got the chance. She still had to hand wash and dry it anyway so a little mending would not be a chore. Holding the gown up to the light of her bedroom light, she noticed a gleam of light on inner side of the tear. She poked a finger to feel for the item and pulled out a silver glass beaded French coin that was caught on the side fastening of her dress. The coin was polished clean, the figure on the coin perfectly visible. It was from Nraug Txuj’s vest. She wiped a gentle thumb over the silver. Maybe this was God’s way of leaving her with something of his to cherish. She turned off the lamp and went to bed.

Not a week later, Nkauj Yiv went to Sun Foods on a daily run for dinner vegetables and meat portions, she picked up an issue of the Hmong Times for her own employment research. Upon quick glance at the front cover, she felt the hairs on her nape rise. She was plagued with disbelief, a bit of fury, and confusion. On the front cover was a picture of her forgotten slipper and above that a heading that read: $1,000 Reward for Missing Shoe. 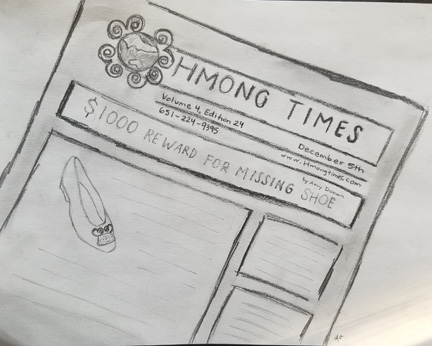