Girl In The White Dress – The Finale

That evening, Shengyeng’s older girl cousins and some of the housewives donned borrowed blue flip flops, and with pant legs folded up, knelt down before enormous pails filled with soapy water and took turns scrubbing pots, pans, plates, and silverware. It was always a scene Shengyeng enjoyed. She liked observing the diligence of each woman with a scruffy Scotch sponge in hand, polishing cookware with abundant force. To Shengyeng, this was a glimpse of her future life; since she was a Hmong girl, she’d inevitably grow up and get married to a Hmong man. So, she always made sure she was watching her mom cook or these women launder dishes so that she can know the ways of a housewife. Her one cousin got married when she was 15. Her mom, when she was 18. Her L.A. auntie when she was 16. Shengyeng always fretted at that thought, because she was not far away. She was already eight going on nine.

“That’s much too young to get married, Sheng,” Shoua told her. The two of them sat crossed-legged before the busy housewives cleaning after the feast had commenced. They’d been talking about boys earlier that day, and now about husbands.

“Well,” Shengyeng said, “I think that it’s not. Mai Neng from apartment four got married at 15, remember?”

“But I don’t want to get married,” Shoua said dismissively. “Boys are ugly and they don’t take baths.” Shoua squinted with distaste.

“But I do, well, at least, that’s what my mom and dad say. We all have to Shoua, because if we don’t, no one will take care of us when we are older.”

“But I don’t want to,” Shoua complained.

“Why not? You used to want to a lot more than me, remember the ladybug story?”

Shoua wore a troubled expression. “My dad is mean to my mom sometimes. He hits her and calls her stupid.” Shoua was picking at the grass now. “I don’t want to be called stupid.”

“Does your mom cry?”

Shoua nodded and then said, “Only when we’re not around. She goes into the bathroom sometimes and I’d hear sniffles. Sometimes when she’s getting dressed, she goes into their closet and doesn’t come out for a while. When she does, her eyes are red.”

Shengyeng hooked her arm around her. Shoua turned to face her. “I heard my mom tell your mom that the reason why my dad is getting a new name is because he’s mean to my mom,” Shoua confessed.

“Does that fix meanness?” Shengyeng asked astonished. If that were the case, she’d consider giving her little brother a new name, too.

Just then, the spirit caller, an elderly man in a black gown with hardly any hair on his head, walked out of Shoua’s apartment door. He was carrying a cane and couldn’t walk very straight. Shengyeng remembered seeing him hover over the large plate of sweets during the spirit calling, name-giving ceremony.

“Oh so that’s the guy that gave your dad a new name?”

Shoua shrugged her shoulders, afraid to speak as the man approached them, and then walked pass.

Shoua exhaled a breath she’d been holding. In an exasperated tone, she murmured, “I think so.”

“It’s okay Shoua, you don’t have to get married if you don’t want to,” Shengyeng suggested, bringing the conversation of marriage back to the table. “Me and my husband will have a lot of babies and I will tell them to take care of you, too.”

“You know, I’ve already taught myself how to pare a fruit with knife.”

“It’s so easy,” Shengyeng said proudly. “I just watched my dad slice me apples and Asian pears sometimes and I try it myself.”

Shengyeng instantly came to her feet afraid of being left behind too far, and strode behind Shoua headed toward the grassy hill beside the parking lot.

Morning came on too soon. Shengyeng was feeling very anxious about leaving her again-best friend in Fresno. She’d already packed her backpack of clothes and her toothbrush and was ready to head out. The feeling was all too familiar. It was like the time when her mom and dad and her siblings had moved away from Fresno the first time. A feeling like the first day of school or the feeling of being lost inside K-mart, not knowing if your mom or dad left yet or not. It formed heavy as a stone in Shengyeng’s belly and she wished that she could take Shoua with her. That would make everything much more fun, from the car ride to the rest area lunch stop.

Unfortunately Shoua didn’t come with her. She wouldn’t get to, even though they both had two whole weeks left of summer before they’d start school again. Shoua’s dad was adamant that Shoua stayed home. It was a long ways from Fresno to L.A. and Shoua’s parents would not be fine with having to drive over that far to pick her up when it came time for school.

Shengyeng got into the car after her brother who was already fast asleep. This time, Shengyeng’s dad put the blue Igloo ice chest in the middle in between them. It didn’t have ice in there this time, because Shengyeng’s aunt instead packed them foil-covered boiled chicken and steamed rice sticks wrapped in banana leaf. In a paper bag was a large bag of shrimp chips, coconut drinks, individually wrapped Pandan flavored cakes, and sandwich cream cookies. Even though Shoua couldn’t accompany her on the ride back home, at least she’d have these snacks to look forward to. It wasn’t often that her mom bought them snacks. Also, considering that she wouldn’t be sitting next to her brother during this trip, she’d be free to move about in her seat and can enjoy the view of the mountains.

As the car rode off, Shengyeng waved at Shoua who was standing beside her mother with one hand waving back. Just as they exited the sliding black gates of the apartment on Marks Street, Shengyeng’s stomach growled sourly. Her seatbelt had already been buckled. With caution, she used the might in her right thumb to push slowly, but forcefully down on the seatbelt fastener to undo her buckle. She wanted to lean down by her foot, and take ownership of the bag of large, undeniably salty goodness of the shrimp chips. She heard her buckle click, the belt becoming loose around her chest. With one eye trained on her mother and another at the corner of the shiny pink and white chip bag poking from the top if the paper bag, she hoped by some force of nature to grab the bag without her mom noticing. As her fingers touched the bag of chips, she flinched at her mother’s voice, “Quit it you hungry rat! Are you going to die if you don’t get it eat it now?” Shengyeng bit back, retreating to her seat immediately. It was too good to be true anyway, she thought. Perhaps when her brother woke up, she’ll ask him to want some. And then when he had it, she’d be free to share with him. Her spirits deflated. The thought of not being able to claim the whole bag to herself killed her inside. Tears could have welled in her eyes if she thought on it more, but now really wasn’t the time – not for crying, nor for feeling sorry for herself. Now that the prospect of candy was no longer in view, she needed to find some other way of cheering herself up.

Her dad was just driving up to the mountains, and though it was midday and hardly dark, she would search for any signs of the girl in the white dress. If she sees anything resembling it, at least she could claim that she’d seen her dress.

Why had she died there? Shengyeng thought again. Her auntie told her that a man didn’t want to keep her baby and so killed her and left her there so no one would know. Can something like that really happen? If she got married to a Hmong man, like her mom and dad had always said she’d one day do, what if that same thing happened to her? What would she do? How would she get home from the mountains between Fresno and L.A.?

“Dad?” Shengyeng heard herself say. “Why did Shoua’s dad have to get a new name?”

“Elders get re-named when they are going into a new chapter in their life. A married man and woman, when they have a son, a house, and a good job, they are considered successful in life and they have to receive an elderly name so they can have good luck in their life.”

“Va is his young name, that’s why you call him Uncle Va. But his new name is Cher Va (Txawj Vam). His new name means that in life, others will only know to cherish him. You will call him Uncle and Auntie Cher Va now. You can’t use the old names anymore.”

“What happens if I use the old name?” Shengyeng asked quizzically.

“Ghosts don’t have eyes, but have ears. They will hear it and know where to find him to bring him bad health,” her mother added, dutifully.

“Really? Is that really true?” Shengyeng found that hard to believe. “So everyone gets a new name in their life? Even me?”

“Stupid child!” her mother chided. “When you’re a child, you only get a new name if you’re sick. That’s because your spirit or the ghosts do not like your given name. So if you change it that symbolizes your re-birth and so ghosts and evil spirits won’t be able to track you anymore. But here, Uncle Cher Va is getting a new name because he is of age.”

By then, Shengyeng felt her ears pop again. They were just driving up to the mountains where the girl in the white dress undoubtedly rested. Out her window, all she could see was a grassy wall of mountain with periodic massive large rocks plugged on the mountainside.

“So if I wasn’t sick then that means I don’t get a new name?”

“Silly child!” her mother chided again. “That’s not something you should want! Getting a new name to cure a sickness is a bad luck thing. Don’t you know your Uncle Cher Va, his real name is not Va. It’s Tooj. In English, they call him Tom.”

Just then, a draft of wind brushed over their car in one sweeping motion. The roof of the car thundered as if they were under the force of a humongous vacuum. Trees on the side of the road waved violently, like caught in a storm.

“Tiger bite, what is this?” Her dad cursed. The car slid in a brief flurry, sending Shengyeng and her brother swinging against the car door, and then toward the Igloo ice chest that sat between them. Oddly enough, the shudder was short-lived. The trees stopped shaking and the traffic, though amok, slowly eased back into the lane.

“When he was in high school,” her mother continued to explain, “he’d dated a girl and she went missing. Then one day, he became very sick. He couldn’t get out of bed and was coughing blood; he almost died, until grandma and grandpa went to pull him out of college. They had a shaman call his spirit and give him a new name, Va. Since then, he became better and wasn’t sick anymore.

The trees lining the road weren’t shaking anymore. The honking subsided as traffic settled down. Shengyeng looked up and out of her window. Up high on the top of the mountain, the trees still oscillated. Perhaps there was more wind up high. To her surprise, caught on a branch was a white silk linen nightgown flapping smoothly like a flag in the wind, waving at her as if to say hello or farewell. 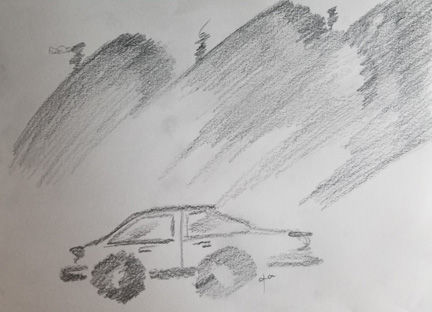