Poorness is a plague. It eats you up inside like a parasite. It mostly infects you from childhood and even if you find a cure to it once you’re old, it never truly leaves you. It plants its mark on your body, a memory that can never be erased. And if you are unlucky, it very much drives the rest of your life. Even when you have experienced a lot of great life successes, you will find that you can never truly graduate from being poor.

It was a school day. I was at the bus stop alone that morning. My two elder sisters took the high school bus that came before mine, so I was stuck waiting for the elementary bus with my mom and little brother.

My mom was never a person I was fond of. Her very presence can send chills down my neck. I never knew when she was happy or when she was going to yell. She was unpredictable in that way but can also be predictable in others. As I stood there, hair twisted into a tight bun, backpack on my back, hands holding my bag of Family Sized Lays Classic potato chips, I was feeling sorry for myself. I didn’t want to complain to my mom, because I knew she wasn’t going to remedy my discontent. But I was unhappy. I was really unhappy and even angry. Mainly, I was embarrassed.

Ms. Penny, my third grade teacher, was my favorite teacher in the whole world. Actually, she was my favorite person in the whole world. I really loved her like a mom. In some ways, I knew she loved me like a kid too. She let me and only me know her first name. It was Lindsey. She was Asian and I was Asian. She taught me that I was a special girl. When I went to school with untidy hair, she would tuck my loose locks behind my ear, gather and braid my hair with careful, gentle hands. She even cleared away the crusty stuff that collected at the corner of my eyes with her fingers. I hated burritos and they served it a lot in my school. It was as if she knew that because one day, she encouraged me to bring rice and dinner leftovers to school as cold lunch. She made me feel like I was not different but completely normal. Sometimes when I was good, she’d let me eat lunch with her in our classroom. Other times, she even took me out for tacos at a local fast-food place. There, she’d buy me a taco and soda. I didn’t like to eat tacos, just as I didn’t like to eat burritos, but because I liked Ms. Penny so much, I gladly ate anything that she ordered me. I knew she loved me just as much as I loved her.

The day prior, she had suggested we have a classroom party. “It’ll be fun,” she said. “You can bring treats if you want, but if you cannot, that’s okay. I’ll be bringing in a lot of surprises so we’ll have plenty of fun things.”

When Mom went to the store yesterday, I didn’t get to go. I had to stay home with my older sisters because Txuj Ci, my baby brother, wanted to go. He always gets to go over me. Mom says it’s because he’s younger and he doesn’t know anything so deserves to go. That’s just another way of saying, “We love him more than you.” But I wasn’t terribly upset because whenever Txuj Ci went with Mom and Dad to the store, they softened up. It was like they became nicer people around him. This was useful because I needed a favor today; I needed them to buy me treats. “Buy me candies!” I yelled as they were leaving the front door of our apartment. I only said it once, because if I pushed it in any way by overstating the request, this may annoy Mom and Dad and they may not buy it for me at all. The rule was: the less annoyed they were, the more likely they would be in following through with the request. Besides, it wasn’t them who would be facing embarrassment in the third grade, so what did they care?

My idea was just one bag of Snickers or Twix or Milky Way or something. Anything that was wrapped and pass-outable. When they arrived, I saw the corner of a yellow bag peeking out of the white Thank You-print grocery bag. Mom threw the bag over to me without explanation.

“I said I wanted candy,” I said in a medium loud voice. I was mad but not mad enough to anger Mom and potentially risk this bag of chips getting taken away.

“That is candy!” she said. She was already walking away before I could think of something else to say. I’d only want to say it, because I actually wouldn’t say it. If I complained, it was predictable that she’d take the chips away from me that instant. So I just accepted my fate.

But as I stood there that morning, at the bus stop, with Mom and Txuj Ci, I was angry. I knew that if I got up to pass out handfuls of chips while other people passed out wrapped candy, I’d be laughed at. And maybe, just maybe, Ms. Penny wouldn’t like me anymore. Maybe I wouldn’t be her favorite kid anymore. How could I let that happen?

“Put your candy in your backpack before you get into the bus,” Mom said.

I was carrying it by the grocery bag handle, not wanting to do what she’d asked. “Do it!” she chided.

Anger showed on my face. I bit my bottom lip to keep from exploding, but it was no use. “These are chips, not candy! If I pass these out in class, I’ll be so embarrassed.” I managed to say in a medium-low voice.

Mom turned and glared at me, her one hand holding my brother Txuj Ci’s hand and the other rested on her hip. Her lips thinned and twisted distastefully, her eyes glued on me. “Well then, give them back!” Mom reached out swiftly toward me and snatched the yellow bag of Lays from my grasp. She seized it just before I was able to even consider putting it in my bag now. The yellow Twinkie-like school bus conveniently pulls up and breaks in front of me with a sharp screech, its doors squeaking open. Paying no mind to my reddening cheeks or lack of “candy,” mom nonchalantly opened the yellow bag of Lays and plopped one thin crisp onto her hungry, outstretched tongue. Regret filled my belly and anger heated my head. I suddenly felt like I could faint.

Txuj Ci, being three and all, tugged on Mom’s shirt and she plopped a thin crisp on his tongue too. I wanted to stomp my feet and cry. Instead, I hopped on the bus, found my window seat, and watched them consume crisp after crisp. My mouth watered as disappointment filled my eyes. A part of me wanted to slap myself silly. Another part of me wanted to slap my brother silly, so that Mom could be mad. I knew the truth then and there, in that window seat, clear as day. I absolutely did not want to show up to my third grade class with the Lays potato chips because people would know that I was poor. People would tell me that I couldn’t afford real wrapped candy. But now, it was even worse. I had nothing to pass out and I felt like dying.

My mom did not meet my gaze once. It was as if she had been planning this all morning. Maybe she’d hope that I’d complain so she’d have this morning snack. The doors on the bus finally screeched close and the bus began to move. Mom and Txuj Ci had already started walking toward our apartment; the yellow bag was probably half empty by now, just like my heart and soul. My lovely chips would be finished by the time I returned from school, and I would have nothing other than my poor and embarrassed self. Candy, I thought to myself, how could something so sweet bring on so much pain, embarrassment, and suffering to a third grader like me? 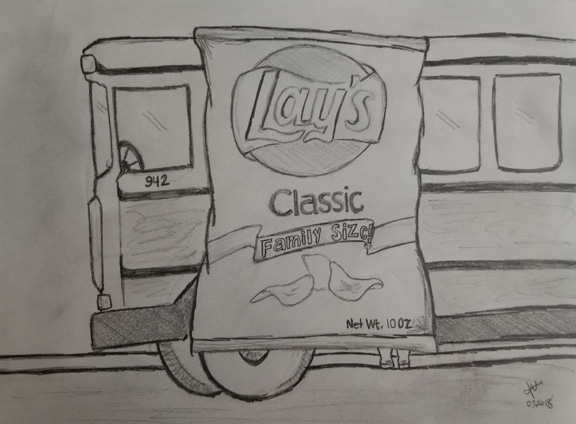